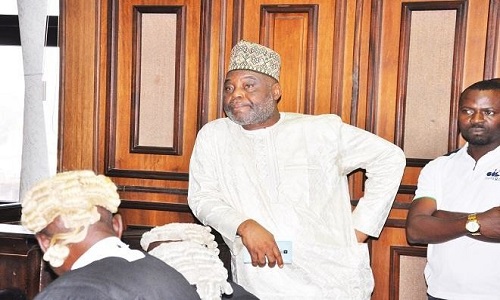 The Federal High Court sitting in Abuja on Wednesday adjourned the trial of founder of DAAR Communications Plc, Chief Raymond Dokpesi, till April 28 and 29.

The Economic and Financial Crimes Commission, EFCC, had re-arraigned the media mogul before the court for allegedly benefiting from the arms gate slush funds.

Dokpesi, who was initially docked before the court on December 9, 2015, is facing a six-count criminal charge.
He was accused of ‎receiving about N2.1billion from the office of the National Security Adviser, NSA, for Peoples Democratic Party’s ‎presidential media campaign.

According to the charge, which was signed by the Deputy Director, Legal and Prosecution at the EFCC, Mr. Aliyu Yusuf, the fund was released to the accused person by the erstwhile NSA, Col. Sambo Dasuki (rtd), ‎between October 2014 and March 19, 2015.

The funds were allegedly transferred from an account the ONSA operated with the Central Bank of Nigeria, CBN‎, to a First Bank‎ of Nigeria Plc‎ account owned by DAAR Investment and Holding Company Limited.

Mr. Dokpesi, a chieftain of the Peoples Democratic Party, PDP, denied any wrongdoing.