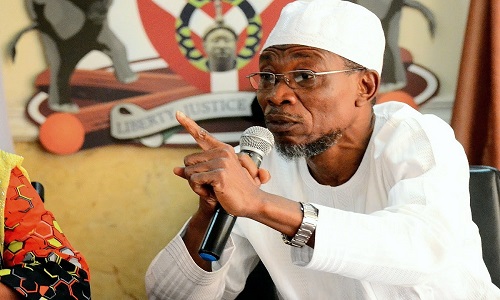 The Osun State Government on Sunday said despite receiving a paltry N6million as its allocation for February 2016, it would still pay workers salary at the end of March.

The government was reacting to reports that workers in its employ would not be paid salaries this month of March as a result of the development.

A statement issued by the Director, Bureau of Communication and Strategy in the Office of the Governor, Semiu Okanlawon, described as uncalled for, the insinuations that the salaries for March would not be paid.

“The Government assured its workers that just as the Rauf Aregbesola administration had weathered the storm to pay salaries up to December, the government is executing with the support of all stakeholders, including the workers, a well-mapped out strategy for ensuring that workers are not made to pay more price for the dwindling allocation than they have done”, he said.

Mr. Okanlawon explained that the considerably reduced FAAC allocation was not strange news to the state, noting that Osun received less than N150 million from October till date as allocation from the federation account.

According to him, in spite of repayment obligations for the Infrastructure Programmes it has been prosecuting, Osun has paid more than N5billion in salaries between the same period.

“FAAC is not the only source of revenue to the state, and the commendable support of workers has allowed us to stretch our reserves and other sources to pay workers on mutually agreed terms as well as fulfill our development promises to the majority of the people”, he said.

“As at today, the process for the payment of January salaries is at the final stages. Osun workers will receive their Salaries from this week in preparation for Easter holidays.

“The State’s today remains a major projects site employing thousands of our people in simultaneous the construction of major roads, models Schools and other infrastructure mostly to be completed before the end of the year. Osun is therefore fulfilling its obligations to the people and running government.

“The state calls on all that care to come to visit Osun to see for themselves the moods in the state rather than pander to rumours, conjectures and lies”.

The statement further said that by virtue of its poor allocation, the state had not had the opportunity of ample resources commensurate to the humongous responsibilities of payment of salaries, payment of pensions and gratuities, and implementation of capital projects.

“But due to prudent management of resources, creative infrastructure financing, this government has been able to fulfill its obligations in all these critical areas of governance,” he said.

“The fact remains that Osun, under Aregbesola did not have to wait for the day the state would get N6million as allocation before proffering solutions towards sustainable economic self-reliance.

“This is why Osun has reduced the cost of governance, moved aggressively to increase Internally Generated Revenue (IGR), sought to attract investments into the State through provision of hitherto non-existent infrastructure and enabling environment and instituted performance-driven governance.

“It must be noted that all hands are on deck towards more convenient repayment schedule of existing loans as part of plans to free the state’s resources for critical needs of governance. This is in addition to the drive for internally generated revenues the performance of which is very encouraging”.