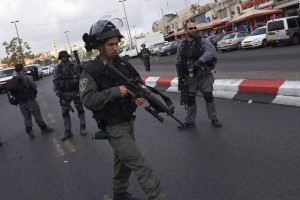 Israeli military forces were led into a gun battle with Palestinian fighters by a smartphone navigation app that had a security feature switched off, authorities said Tuesday. The Israeli soldiers were using a Google-owned application called “Waze,” which is designed to help users find predetermined locations, before being directed to the Qalandiya refu­gee camp near Jerusalem Monday.

Unfortunately for the troops, who were traveling from Jerusalem to the West Bank city of Ramallah, officials said, a setting that helps users void dangerous or risky routes was not activated. Unfamiliar with the territory, the soldiers used the Waze app and were directed to the shortest route possible — right through the refugee camp.

At the camp, the Israelis came under attack by Palestinians using firearms, Molotov cocktails and other dangerous items. A Palestinian student was killed and 10 other Palestinians were wounded, along with 10 Israelis, news reports said. Officials said five Israeli border patrol agents were among those injured. “The driver deviated from the suggested route and as a result, entered the prohibited area,” Waze said. “Unfortunately, there is no ability to prevent [such incidents] altogether as ultimately some prudence is in the driver’s hands.”

Shortly after arriving at the camp, officials said, fighting erupted and grew for the next hour until other Israeli forces rescued the soldiers. The application, which is based on crowdsourced data, has a limitation that proved deadly in this case: it can potentially miss dangerous areas in rural locations where the app is not commonly used. “I have always said that if even if you use a navigation program, you still need to know how to navigate with a map,” Israeli Defense Minister Moshe Yaalon said.