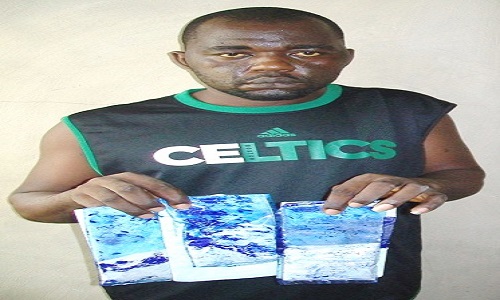 The National Drug Law Enforcement Agency, NDLEA, has recorded a major success in the war against drug trafficking with the interception of a heroin-laden letter in Lagos.
The letter according to the agency, was sent from Bengaluru, India, on Express Mail Service (EMS) and addressed to one Mr Yunusa Amusan, 33, in Mushin, Lagos.
The NDLEA in a statement Monday by its spokesperson, Ofoyeju Mitchell, said about four hundred and eighty (480) grammes of powdery substance that tested positive for heroin was found inside the letter.
The statement disclosed that the thin parcels of heroin was carefully concealed in the letter in a manner that makes it almost impossible to detect.
The statement quoted the NDLEA Chairman/Chief Executive, Col. Muhammad Mustapha Abdallah (rtd), as saying that the arrest was made possible by the diversification of the agency’s operations.
“The operations of the Agency have been diversified to cover mail services. Drug control is an intelligence-led operation and the NDLEA under my dispensation will spread its tentacles to all possible areas of narcotic smuggling. We will not relent in taking deliberate and sustained efforts towards preventing drug trafficking under any guise in the country be it by air, land and water”, Abdallah stated.
The NDLEA boss further said investigation revealed that the suspect, who is in custody, allegedly connived with his uncle who lives in India to import heroin disguised as letters to Nigeria.
Mr. Abdallah assured Nigerians that the NDLEA will always work towards a drug-free society.
In his confession, Mr. Amusan said: “I run errands for my uncle who lives in India. He used to send money and letters to me to give to his wives and friends. Sometimes he will ask me to buy foodstuff and send to him in India and in return, he gives me money to take care and sustain myself”.
The suspect, who claims to be an indigene of Ogun State and unmarried, said he dropped out of school and learnt how to repair faulty television sets.
“After my Junior Secondary School Certificate, I could not further my education due to lack of sponsorship. I later learnt how to repair television sets but could not rent a shop to start my own business. The letter my uncle sent to me was opened in my presence and other officers and it was found to contain heroin”, he confessed.