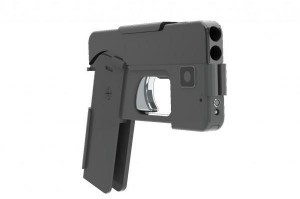 A Minnesota start-up’s new product, a double-barrel .380-caliber handgun, is drawing attention for its concealment method — it folds up to look like a cellphone. Kirk Kjellberg, CEO of Monticello-based company Ideal Conceal, said he came up with the idea for the folding pistol when a child caught a glimpse of his gun at a restaurant.

“I walked towards the restroom and a little child, a boy about 7, saw me and said, ‘Mommy, mommy, that guy’s got a gun,'” Kjellberg told KARE-TV. “The whole restaurant of course turns and stares at you and I thought, ‘There’s just gotta be something better to do than this.’ Kjellberg told CNNMoney he wanted a gun that wouldn’t cause people who spot the object to look “at you like you’re about to shoot the place up.”

The gun is designed to fold up into a rectangle that bears a strong resemblance to a smartphone, complete with a fake camera. “So your new pistol will easily blend in with today’s environment,” the company’swebsite states. Kjellberg said a prototype of the gun, which he said cannot be fired from its folded position, is expected to be completed in June with manufacturing expected to follow in October. The folding guns will be sold for $395 each, Kjellberg said.

He said the gun would be ideal for someone who wants or needs to carry their weapon “and not have to engage other people about why they’re carrying that gun.” Bill Johnson, executive director and general counsel for the National Association of Police Organizations, said the gun design could pose challenges for law enforcement. “In general, the concept of any kind of weapon that’s disguised, so that it’s not apparent that it’s a weapon, would be cause for concern,” Johnson said.