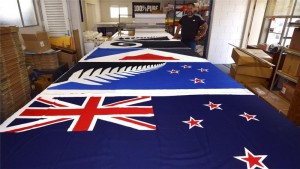 New Zealanders have begun voting on whether to change their flag from a design which features the British Union Jack to one which features a native silver fern. The postal ballot will extend over the next three weeks from Thursday, with preliminary results to be announced March 24.

Organisers say that deciding the issue by popular vote represents a world first, and that other countries have changed flags by revolution, decree or legislation. Opinion polls indicate the nation of 4.7 million people will opt to stick with its current flag, although proponents of the new design say they have momentum on their side and that more and more people are embracing a change. Those favouring change say the current flag is too similar to Australia’s and references a colonial past that it is time to leave behind.

Those opposed to change say the new design is uninspiring or is an attempt by Prime Minister John Key to create a legacy. Critics have also said holding the referendum, estimated to cost $27m, is a waste of money. One group seeking to keep the status quo is the Returned and Services Association, which represents war veterans.

“It’s been a witness to not only my personal history and my life in the military but also borne witness to major events in this country,” war veteran Clive Sinclair told Al Jazeera in Auckland. “It has a lot of history behind it so it’s not something that you can discard.” But another veteran, Chris Mullande, voiced another opinion, saying that the challenging design represents the new, new multi-cultural New Zealand. “There are links to the past, it celebrates our present and it also very bravely looks to the future,” he told Al Jazeera.