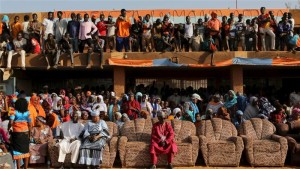 Niger is set to hold its first-ever presidential run-off, with incumbent Mahamadou Issoufou on track for a second term after his main rival was flown from jail to a Paris hospital for treatment and with the opposition boycotting the vote.

The election on Sunday pits Issoufou, a former mining engineer nicknamed “the Lion”, against jailed opposition leader Hama Amadou, 66, known as “the Phoenix” for his ability to make political comebacks. Amadou has been forced to campaign from behind bars after being detained on November 14 on baby-trafficking charges he says are bogus and aimed at keeping him out of the race.

Just days before the vote, he was evacuated from prison and flown to Paris for medical care, with the government saying he was suffering from an unspecified “chronic ailment”. On Friday, Amadou’s doctor said his condition was getting better but added that he would have to remain under observation for “at least 10 days”.

“His health is improving and currently his condition is not life-threatening,” said Luc Karsenty, a doctor at the American Hospital in the chic western Paris suburb of Neuilly. The situation has created a tense atmosphere in the country, which has a history filled with military coups and it has only had a multi-party democracy since 1990.