Home Entertainment Nigerian Celebrities And Politics: SEE Which Of Them Are Currently Holding A...
Facebook
Twitter
WhatsApp 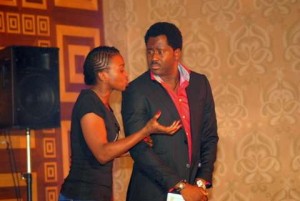 It’s now a common trend that a lot of Nigerian celebrities have been getting involved in politics.

Veteran Nigerian actress Hilda Dokubo was once the Special Adviser to the former Governor of Rivers state Peter Odili.

Let’s not forget the hunky and handsome Nollywood star, Richard Mofe Damijo who was once the Commissioner for Culture and Tourism in Delta State.

A lot of celebrities took part in the general elections last year; even though many of them didn’t win.

Below is a list of 5 celebrities in political offices: –

1) Desmond Elliot
In 2014 Nollywood star and director Desmond Elliot moved into politics and joined the political partyAPC. The following year he ran for a seat in the Lagos state of Assembly. Desmond Elliot shocked everyone by winning.

Months later he was sworn into office at the Lagos State House of Assembly as a member representing Surulere 01 Constituency.

2) Ini Edo
In February 2016, superstar actress Ini Edo, 33, was appointed Special Adviser on Tourism to the Akwa Ibom State Governor Udom Gabriel Emmanuel. Speaking about her appointment she said “To be called to serve is an honour. I give God all the glory. Am grateful to my state, my Governor, every one of you with your constant prayers and support… God bless u.”

3) Femi Adebayo
Also in February 2016 popular Yoruba actor Femi Adebayo was made the Special Adviser to the Governor of Kwara State, Abdulfatah Ahmed on Arts, Culture and Tourism. “Today I was appointed as a Special Assistant to the Kwara state governor on Arts, Tourism and Culture. Thank God for an opportunity to transform my state into a foremost tourist state that will attract foreign and domestic tourists” announced Femi Adebayo on Instagram. This month he shared the first photo from his office.

4) Dayo ‘D1’ Adeneye
In November 2014 media personality Dayo ‘D1’ Adeneye announced that he was running for office. He released a poster and wrote “My dear friends. Having succumbed to the wishes and requests of my people in Ogun state I have decided to contest in the 2015 elections. Kindly keep me in your prayers as I embark on this next phase of my life.”

Dayo Adeneye lost at the primaries but a year later he was appointed as the Commissioner for Information & Strategy in Ogun state.