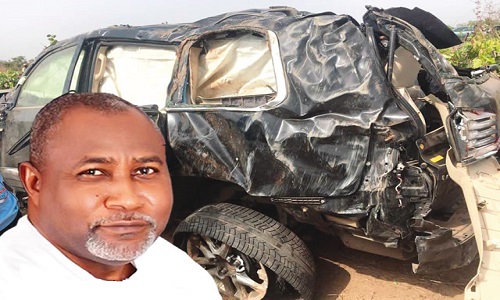 The Nigeria Labour Congress (NLC) has sent a message of condolence to President Muhammadu Buhari, the governor of a Kogi state, Alhaji Yahaya Bello and the family of the Minister of State for Labour, late James Ocholi, SAN, over the death of the minister.

The NLC President, Comrade Ayuba Wabba, said in separate condolence letters that the death of the minister is a great loss to all Nigerians.

It would be recalled that Ocholi died on Sunday in an accident on Kilometre 57, Kaduna-Abuja expressway after the vehicle he was traveling in had a burst tyre on motion and summersaulted several times. The accident also claimed the life of the late minister’s son, his wife and the driver, who reportedly died on Monday at the National Hospital, Abuja, from injuries sustained.

The letter to the President reads: “On behalf of the Nigeria Labour Congress, I wish to condole you on the tragic death of the Honourable Minister of State for Labour and Employment, Mr. James Ocholi (SAN) and members of his family.

“In the brief moment we have worked together, I found Mr Ocholi earthy, humble, lively and knowledgeable. I had no doubt in my mind he was an asset in government-labour relations and certainly, he was going to play a more critical role in the future. His death is therefore a big loss to all of us.

“Mr. Ocholi was a civil, decent and humble man; a legal luminary; and an illustrious son of Kogi State, who brought to bear on his job, clinical efficiency and humanity. He was a trusted ally of Labour “It is a shame, death has robbed us of this irreplaceable and priceless gem”.