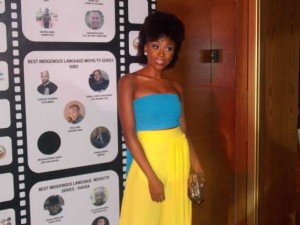 UK groomed Nollywood actress, Beverly Naya has switched up her style which she rocked at the nominees cocktail party of the AMVCAs 2016.

The new hairdo and look, according to the actress, is just a decision to be different from the norm after having the same look for many years in the industry.

“I just decided to change my look and standout from others. It’s just something sudden and I guess the feedback is good. What do you think?”