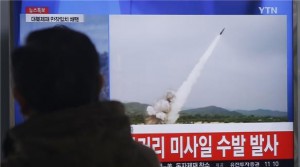 The projectiles could be missiles, artillery or rockets, according to the defence ministry. North Korea routinely test-fires missiles and rockets, but it often conducts more weapons launches when angered at international condemnation. Pyongyang conducted its fourth nuclear test in January, making the widely disputed claim that it successfully detonated a hydrogen bomb.

Last month, it put a satellite into orbit with a long-range rocket that the United Nations and others see as a cover for a test of banned ballistic missile technology. The new UN sanctions include mandatory inspections of cargo leaving and entering North Korea by land, sea or air; a ban on all sales or transfers of small arms and light weapons to Pyongyang; and expulsion of diplomats from the North who engage in “illicit activities”.