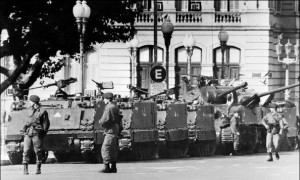 Human rights activists in Argentina have called on Barack Obama to cancel – or at least reschedule – his visit to the country this month because it coincides with the 40th anniversary of the brutal 1976 coup that installed a military dictatorship that was at first supported by the US. The US president is due to arrive in Buenos Aires on 24 March, four decades to the day after a military junta imposed martial law and unleashed a “dirty war” that continued until the restoration of democracy in 1983.

Adolfo Pérez Esquivel, who won the Nobel Peace Prize for his human rights work during the dictatorship, said that Obama’s arrival would coincide with huge marches in commemoration of victims of the coup, and could even provoke confrontations. “Obama represents a country that was responsible for various military coups in Latin America, including those in Chile and Argentina,” he told the Guardian.

Although the exact number of victims remains uncertain, it is estimated that anything between 20,000 and 30,000 mostly young leftwing opponents were made to “disappear” during Argentina’s 1976-83 dictatorship. Pérez Esquivel – who was tortured and held without trial for 14 months in the late 1970s – has written an open letter to Obama asking the US president to postpone his visit. “In 1976, while you were only 14 years old, we were starting the most tragic period of our history, with the implementation of a state terrorism which subjected our people to persecution, torture, death, and the forced disappearance of persons,” Pérez Esquivel wrote. “I am writing as a survivor of that horror [which included] financing, training, and coordination by the United States.”