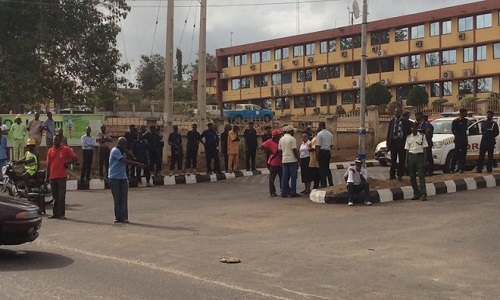 Workers in Ogun State on Wednesday evening suspended their 10-day strike action, with a promise to resume work Thursday.

The workers suspended the industrial action following the intervention of eminent citizens of the state including traditional rulers, State House of Assembly and retired heads of Service and Permanent Secretaries.

Recall that the workers, under the Ogun State Civil Service Union embarked on indefinite strike on Monday, March 7, over inability of the state government to offset their seven months’ salary deductions, which they lamented was taking its toll on them.

They also accused the state government of failing to address their grievances oncontributory pension and issues about gratuity.

A statement announcing the suspension of the strike said:
“Following the intervention of the Ogun State House of Assembly led by the Rt. Hon. (Prince) Suraj Adekumbi, the Paramount Rulers in the State, His Royal Majesty (HRM) Awujale of Ijebuland, Oba (Dr) Sikiru Kayode Adetona; the Alake of Egbaland, His Royal Majesty Oba (Dr) Michael Adedotun Aremu Gbadebo; the Olu of Ilaro, Paramount Ruler of Yewaland, His Royal Highness, Oba (Dr) Kehinde Olugbenle and other monarchs as well as respectable and eminent citizens, across the State especially the Association of Retired Heads of Service and Permanent Secretaries on the ongoing industrial action called by the Joint National Public Service Negotiating Council in conjunction with the Nigeria Labour Congress (NLC) and the Trade Union Congress of Nigeria (TUC) – the organized labour at its emergency meeting held at the TUC secretariat today, Wednesday, 16th March, 2016 resolved to suspend the strike action with immediate effect as mark of respect for the above mentioned institution and the prominent personalities in the State”, the statement reads.

The workers said the suspension of the strike was to give room for negotiations between the labour and the state government within 14 days.

“The organized labour appreciates the steadfastness and the overwhelming support received from our teeming members and the timely interventions from the state’s well-meaning citizens here mentioned as well as the understanding members of the public while the industrial action lasted”, the labour leaders stated.