Residents of Arepo, in the Obafemi Owode Local Government Area of Ogun State on Wednesday, staged a protest following the death of three persons allegedly killed by some naval officers at the weekend.

Family members and friends of the victims, Biodun Mohammed, Chicago and Body, were said to have blocked the only entrance into the Arepo community, preventing vehicular movements in and out.

According to The Punch, the trio was rounded up at a bar in Voera Estate, reportedly whisked away and shot dead by the alleged naval officers. 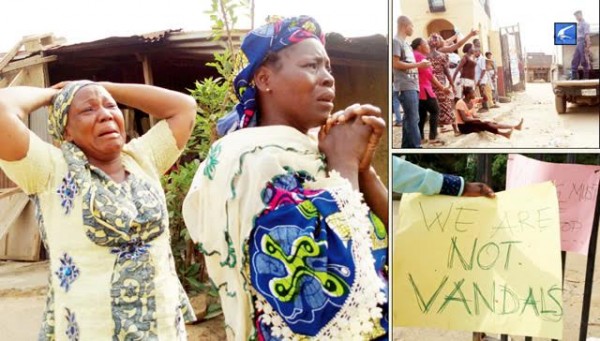 It was learnt that the corpses of the victims became bloated and policemen from the Ibafo division who surrounded the place stopped people from having a look.

The protest resulted to heavy gridlock on the road which spilled onto the Lagos-Ibadan Expressway.

Confirming the incident, the Police Public Relations Officer, Ogun State, DSP Muyiwa Adejobi, said the police had begun investigations into the deaths, adding that they were also making arrangements to remove the corpses and deposit them in a mortuary.

Adejobi said, “The Ibafo division of the command got the information that three people were taken by some men at a beer parlour on Sunday around 8pm, and they were shot dead and their corpses were found in Arepo. We are investigating and we are going to get the perpetrators.
“Meanwhile, the Divisional Police Officer is trying to get an ambulance to see how we can evacuate the corpses.

“The Deputy Commissioner of Operations has sent more policemen to the community to assist the DPO to forestall a breakdown of law and order.

“There are indications that the suspects are naval officers but we will ascertain this when investigations are completed.

Speaking on the incident, one Motunrayo, wife of one of the deceased, 24-year-old Mohammed, said she confronted the military officers when they arrested her husband on Sunday. 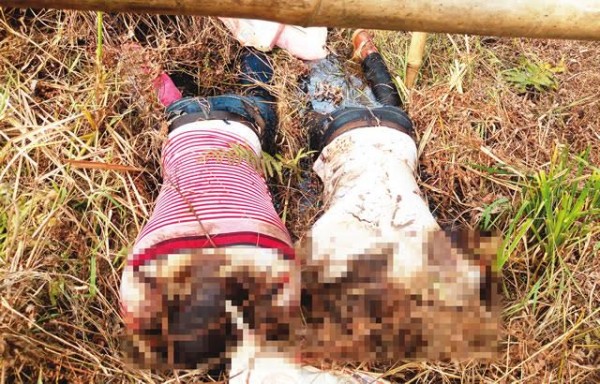 She said, “On Sunday around 7pm, the military officers numbering about seven came to the restaurant where my husband was with a friend. I can identify two of them as Jason and Ola. I asked them what his offence was, but Jason asked me to keep quiet.

“He pointed a gun at me and threatened to shoot me dead if I moved closer. He did not allow my husband or his friend to utter a word. They took them away.

“I went to report at the soldiers’ base in Ebute and they said they were not holding my husband. But this morning, some landlords in Voera Estate, where he was killed, came to inform me that they had found his corpse in the bush.”

The late Mohammed, who was into furniture making, was an indigene of Ogun State.

A resident, Jide Olorunsola, said the naval authorities killed the men in the creek to cover up the crime and make it appear as if that was where they were caught.

“They made it appear like they were vandals and that they caught them in the creek and shot them dead,” Olorunsola said, accusing the military of highhandedness in Arepo.

He, however, called on the authorities to curtail their excesses.

According to him, “If they find you outside at 9pm, they will harass you for no just cause. They go beyond their boundaries and even go as far as extorting money from residents.”

The protest reportedly almost led to a confrontation with some OP MESA operatives at the Arepo gate as families of the victim insisted their patrol van would not go out.

In the course of the confrontation, two of the officers at the back reportedly cocked their guns, which angered the protesters, who dared them to shoot.

A community leader, however, intervened by appeasing the protesters to allow the military officers to go.

Abubakar denied the involvement of military officers guarding the Nigerian National Petroleum Corporation’s pipelines in Arepo in the killing, saying pipeline vandals who had run out of business because of the activities of the military were out to blackmail them.

The Director said, “For more than one month now, we have not had any operation in that area, so how could we have killed those people? How can the troop deployed for Operation Awase kill them? How do you even believe that members of the armed forces of Nigeria would descend so low as go to meet people in a beer parlour to abduct them?

“The issue is that before our coming, there had been series of vandalism and siphoning of fuel in Arepo.

“Some people had made a lot of money before the government intervened and said no more of that due to the economic recession.

“It is these people that are trying to blackmail us. Anyone saying we killed anybody should produce evidence of who did it.

“However, as a security agency that is supposed to protect lives and property, we are concerned about the loss of lives.

“Last time, they ambushed our officers and some of them were killed; but did anybody make noise? The reason is that we take that as part of the risks of our job, so people should not be using the media to achieve whatever their plot is,” Abubakar said.