Three top officials of Imo State Government were on Wednesday arrested by operatives of the Economic and Financial Crimes Commission, EFCC. 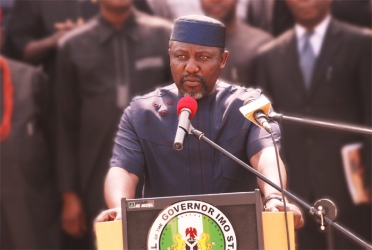 The officials, Obi Paschal Chigozie, Principal Secretary to the Governor of Imo State, Rochas Okorocha; Uzoho Casmir, Director of Finance and Iheoma Kenneth, Treasurer, Government House, were arrested for allegedly diverting N2billion bailout fund given to the state by the Federal Government for payment of salary arrears of the state’s civil servants.

Their arrest was sequel to an investigation into the alleged diversion of the said money, which revealed that the cashier had made cash withdrawal of N456.532 million between September 3, 2015 and October 10, 2015 from the Government House account domiciled in Zenith Bank.

However, it was revealed that the said amount was given to an aide of the Chief of Staff to the Governor, following approval and directive by the Principal Secretary to the Governor.

The suspects would be charged to court as soon as investigations are concluded.