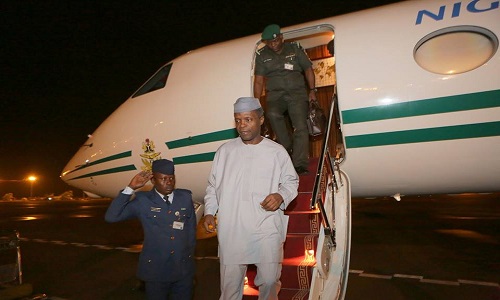 Osinbajo was reportedly billed to attend the Indian/African summit but had to stay back to allegedly prevent Senate President Bukola Saraki from taking the mantle of leadership as Acting President.

In the absence of the president and his vice, the next in hierarchy, which is the Senate president, takes over as acting president.

According to the media reports, protocol officers in the Presidency made a blunder by scheduling the foreign trips of President Buhari to coincide with that of Mr. Osinbajo.

Reacting to the development, the Presidency through the media aide to the Vice President, Mr. Laolu Akande, said the report was false and a “bunch of speculation”.

Mr. Akande said that the Minister of Industry, Trade and Investment, Mr. Okey Enalemah, would be leading a delegation of Nigerians to the Summit in India.

“Nigeria has been invited to the Indian/African summit and the minister of industry, trade and investment will be leading a delegation to the event.

“There is nothing like cancellation. Remember that the visit of the Vice President to any country is not treated in secrecy.

“Whenever the Vice President is to travel out of the country, we inform Nigerians.

“So, this story in question is a bunch of speculation. There is no cancellation”, he said.