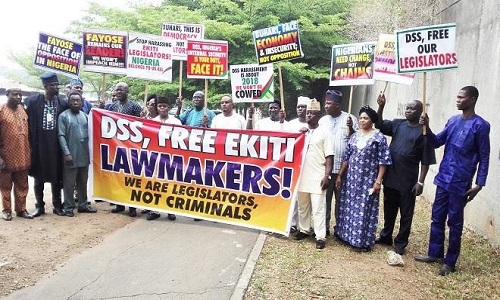 Nine members of the Ekiti State House of Assembly yesterday stormed Ibadan, the Oyo State capital, to hold a press briefing on their alleged harassment in the hands of security agencies.
The lawmakers, who converged on the Iyaganku Press Centre of the Nigeria Union of Journalists, NUJ, as early as 6:30am, said their movements were being trailed by security agents.
Led by the Deputy Speaker, Adewumi Olusegun, they appeared to be on transit as they hurriedly addressed reporters and drove away.
The Chairman, Committee on Information, Gboyega Aribisogan, assisted by Dr. Omotoso Samuel and the Chief Whip, Akinniyi Sunday, alleged that they were offered $1million to impeach Governor Ayodele Fayose.
In their prepared speech, the affected lawmakers unequivocally restated their loyalty to Fayose as they maintained that “no amount of intimidation, arrest, detention, harassment and monetary inducement will make us dance to the tune of those whose only interest is to truncate the Fayose-led government and return to power through the backdoor”.
The lawmakers advised the All Progressives Congress, APC, to “stop trying to get into power through the backdoor. They should stop this harassment, intimidation and use of federal power to oppress innocent Nigerians”.
They also alleged that their lives were being threatened “and we no longer feel safe in our homes in Ekiti State”.
“We want Nigerians to help us ask the police and their collaborators what the arms they claimed were stockpiled during the election used for? Could arms have been stockpiled and no violence, death or attack recorded during and after the election?
“Why is the All Progressives Congress (APC) in Ekiti State willing to ridicule all government agencies? Why have the police not arrested the APC Chairman, Jide Awe, who is wanted for alleged murder and Temitope Aluko, who was declared wanted by the court for perjury, and instead providing security cover for them?
“Even though we believe that the Inspector-General of Police, Solomon Arase, a thoroughbred professional, cannot be part of this clandestine plot, we call on Nigerians to impress it upon the police not to allow themselves to be used by desperate APC politicians. This is because doing so will further expose the penchant of the Buhari-led administration for dictatorship.
“No member of the Assembly is remaining in that state. It is not a question of nine of us here with you. All of us, the 26 members, were targeted but they were trying to arrest 11 of us. Some of us seated here have our names on the hit list.
“We are not going to hide for them. We will resist them with the last blood in our vein, we won’t be coerced. Let it be known to them that we won’t shift ground, no matter the amount of intimidation and harassment. We won’t go into hiding”.
In response to a question whether their absence from the state is not affecting their parliamentary duties, the whether or not the incident is affecting their parliamentary functions, Mr. Olusegun said the lawmakers were still working and passing bills as at Tuesday.