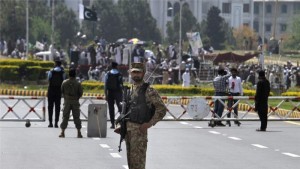 Pakistan rounded up more than 5,000 suspects, then released most of them, in the two days since a suicide bomber killed at least 72 people celebrating Easter, an official said on Tuesday. Investigators kept 216 suspects in custody pending further investigation, said Rana Sanaullah, a state minister for Punjab province from Prime Minister Nawaz Sharif’s ruling party.

Details of the sweeping raids aimed at anyone suspected of armed violence came as the Taliban faction claiming responsibility for the Lahore attack issued a new threat, singling out the media. Sanaullah said 5,221 people were detained and 5,005 released after verifying their identities. Army spokesman General Asim Bajwa said the military and paramilitary Rangers were conducting raids across Punjab, Pakistan’s richest and most populous province, in rapid response to the Easter bombing.

“Right now in Rawalpindi, Multan and elsewhere, operations are ongoing, intelligence agencies and Rangers and army troops are carrying out operations,” he said. Jamaat-ur-Ahrar, the Taliban faction that claimed responsibility for the blast, warned Pakistani media it could be the next target. “Everyone will get their turn in this war, especially the slave Pakistani media,” Ehsanullah Ehsan, spokesman for the group, tweeted. “We are just waiting for the appropriate time.”

As authorities pursued those responsible, hundreds of ultra-conservative Muslim protesters remained camped out in front of parliament on Tuesday in the capital, Islamabad, days after clashing with police. Mobile phone networks in the capital were blocked for security purposes for a second day in a row.  While not directly connected, the two events both demonstrate “intolerance”, said Moeed Yusuf, a South Asia analyst at the United States Institute of Peace. “The ultimate solution does not lie in fighting guns and bullets. It lies in fighting mindsets,” he told Al Jazeera. “The number of attacks has gone down but the mindset of intolerance remains.”