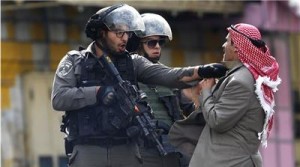 Two Palestinians have been killed in a shootout with police after allegedly attacking a bus in Jerusalem and then opening fire outside the Old City, Israeli police said. At least one person was critically injured after the men opened fire at a lightrail stop near the New Gate of the Old City as they were being chased by police on Wednesday.

The shootings were the latest in a string of attacks coinciding with US Vice President Joe Biden’s arrival on Tuesday.  The attack started in an ultra-Orthodox Jewish neighbourhood of northern Jerusalem, police said.  Police spokesman Micky Rosenfeld said initially, passengers on a bus spotted the two gunmen and heard shots fired. A motorist responded by shooting toward the suspects, who fled by car.

The two assailants were then shot by police outside the Old City.  In a separate incident, a Palestinian was shot after he attempted to stab a soldier near Salfit in the occupied West Bank. He later died of his wounds. Four Palestinians were shot dead in separate incidents after allegedly trying to kill Israelis in occupied East Jerusalem and Tel Aviv on Tuesday, the latest in a five-month wave of such incidents.

Since the beginning of October, 194 Palestinians and 28 Israelis have been killed. Israelis say most of the Palestinians were killed while carrying out alleged knife, gun or car-ramming attacks. Others have been shot dead by Israeli forces during clashes or demonstrations. Rights groups have condemned Israeli forces for using excessive force against alleged attackers and demonstrators, including children.