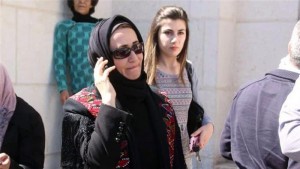 Palestinian human rights groups have condemned attempts by the public prosecutor to question a member of parliament, who has sought refuge inside the Palestinian Legislative Council (PLC) building in Ramallah for a seventh day in a row. Last week, Palestinian Authority (PA) security services attempted to arrest Najat Abu Bakr, who was summoned for interrogation after she accused a cabinet minister of corruption.

The Fatah politician then staged a sit-in at the building of the now-defunct parliament, arguing that the Palestinian Basic Law, or constitution, makes elected parliament members immune from arrest. Abu Bakr, who hails from the northern West Bank city of Jenin, said she was being persecuted for exercising her freedom of expression. She also said that any complaint against her must be assessed by parliament and either approved or rejected.

The current crisis started when she claimed that Hussein al-Araj, a minister closely associated with Palestinian president Mahmoud Abbas, had used public funds to invest in a private water project – a charge the minister denies. Speaking to Al Jazeera, Abu Bakr defended her comments: “I was defending the rights of the Palestinian people,” she said.

“It is sad to see attempts to silence those who speak for the people, and it is equally sad to see the Palestinian Basic Law being trampled over.”  The public prosecutor said Abu Bakr was being summoned for crimes committed, and not for voicing an opinion. “She has been requested to stand before the public prosecution for committing crimes that are penalised by the existing Penal Law,” the prosecutor said in a statement last week.