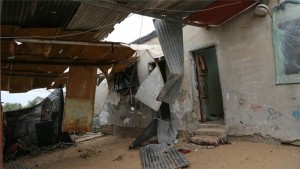 A six-year-old Palestinian girl and her 10-year-old brother were killed in the Gaza Strip by fragments from a missile fired by an Israeli aircraft, medical officials said. Debris from the explosion early on Saturday landed on the children’s home in Beit Lahiya.

The girl, Israa Abu Khosa, died in hospital on Saturday afternoon having succumbed to critical injuries sustained during the attack, Ashraf al-Qidra, spokesperson for Gaza’s Ministry of Health, told Al Jazeera.  Her brother Yassin died earlier, and was the first fatality from an air strike in Gaza since October. Their brother, 13-year-old Ayoub Abu Khosa, sustained moderate injuries from the attack.

The Israeli air strike took place hours after rockets were launched at southern Israel on Friday night, according to the Israeli military. No casualties were reported from the rocket strikes. The Gaza health ministry said Israel carried out five air raids on Hamas facilities. Qassam Brigades, the armed wing of the Hamas movement, vowed retaliation late on Saturday.  A statement on its website said of the two killed children, “their blood will not be shed in vain”. Gaza rocket fire has tapered off significantly since a 2014 war when more than 2,100 Palestinians, mostly civilians, and six Israeli civilians and 67 soldiers were killed.