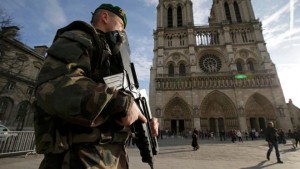 Four people have been arrested in the Paris area as part of a wider investigation into a possible plot to attack France, officials say. Interior Minister Bernard Cazeneuve said police had information to suggest one of those arrested “could undertake violent actions in France”. But he played down French media reports that an attack was imminent. France remains on high alert after the jihadist attacks in Paris in November that killed 130 people.

More than 100 people were killed and many wounded in a series of shootings and suicide bombings that targeted a concert hall, major stadium, restaurants and bars over the course of a Friday evening. The so-called Islamic State (IS) group said it was behind the attacks.

French media reported that three men and a woman were detained at dawn in the 18th arrondissement of Paris and the nearby northern department of Seine-Saint-Denis. They said at least one of those arrested had a prior conviction and had been under house arrest since last month, under new rules imposed after the November attacks.

Mr Cazeneuve said: “We have information about one person that suggests that he could undertake violent actions in France. “This man could have been in contact with people in Syria and members of Islamic State. This person was arrested this morning along with three persons linked with him, and checks are underway.”