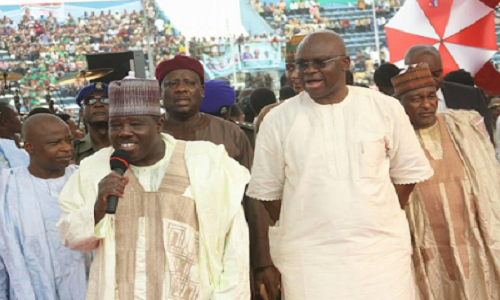 The deputy national publicity secretary of the Peoples Democratic Party, PDP, Barr. Abdullahi Jalo, has warned the national chairman of the party, Senator Ali Modu Sheriff, against listening to counsel to elongate his tenure to 2019.
Mr. Sheriff emerged as the national chairman of the PDP last month amid controversy, which was resolved after it was agreed among the various organs of the party that he would not spend more than three months in office.
But hardly had the dust surrounding his emergence settled than some forces began pushing for the zoning of the national chairmanship of the party to the North, precisely the Northeast, where Sheriff hails from. The position is to be zoned to the South after the expiration of the tenure of the present National Working Committee in May.
But Jalo, who was one of the PDP chieftains that opposed the appointment of the former Borno State governor as party chair, faulted Governor Ayodele Fayose of Ekiti State and other politicians from the southern part of the country for pushing for an extension in office of Mr. Sheriff.
He made this position known while addressing a press conference in Gombe State yesterday.
According to him, following a directive by the NEC of the party, Sheriff had accepted to serve for a specific period in line with the zoning formula agreed upon.
Jalo said already, it was proposed that the presidential candidate of the party would come from the northern part of the country and the national chairman from the south.
“Sheriff should not make a U-turn since he had pledged that he would not stay beyond 21st May, 2016”, he said.