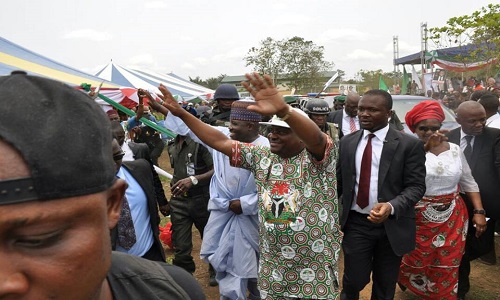 The Peoples Democratic Party (PDP) has called on President Muhammadu Buhari to probe the crisis that characterised Saturday’s legislative re-run elections in Rivers.

The national chairman of the party, Ali Modu Sheriff, made the call at a news conference on Tuesday in Abuja.
Mr. Sheriff said the probe was necessary to bring the perpetrators of the crisis, which led to the death of many, to justice.

“The PDP expresses great concern at the turn of events at the re-run National and State Assembly elections in Rivers.

“We join well-meaning Nigerians to condemn the cases of violence which reportedly characterised the process in some areas.

“We urge the president to immediately constitute a panel to carry out a dispassionate investigation of the circumstances with a view to unravelling the truth and bringing the culprits to book”, he said.

He added that the PDP had investigated the development and had its findings, but would want the Federal Government to conduct its own investigation.

Mr. Sheriff also called on the Independent National Electoral Commission (INEC) to announce the remaining results of the elections already collated at various wards and polling units in the state.

He said the PDP accepted defeat when it lost the presidential election in the country in 2015, but would not accept it if it was denied its right.

“It is not right for INEC to say it is not continuing with the announcement of the results in the middle of the elections. This is not healthy for our democracy.

“INEC should be seen as an independent electoral empire and should not be part of the process where the rights and mandate of Nigerians will be denied”, he said.

The chairman said that PDP had waited for more than 48 hours to assess what took place in Rivers and concluded that the process was not fair to the party.

He condemned the alleged roles played by some officers and members of the armed forces in the elections.

According to him, the officers are said to have in some cases, acted beyond their expected role of maintaining law and order.

Mr. Sheriff alleged that the officers in some cases took over the responsibilities of INEC in the actual conduct of the re-run elections.

According to him, the fact that the armed forces acted as they did in flagrant disobedience of an order of court to the contrary, is a matter that requires urgent investigation and appropriate sanction.

He said security operatives especially the army, was more needed to provide security in areas threatened by insurgency and not in electoral process.