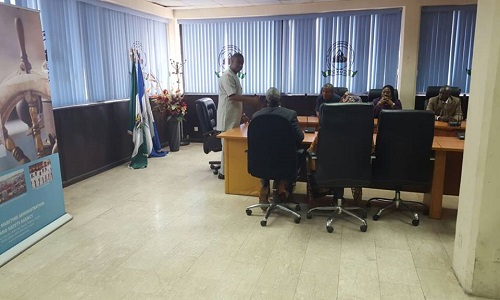 Immediately he arrived the NIMASA headquarters, Mr. Peterside moved to the boardroom for a meeting with senior officials of the agency, which has been weighed down by corruption allegations of recent.

The former Rivers State governorship candidate of the All Progressives Congress, APC, in the last general election, was received by the Executive Director, Maritime Labour, Cabotage and Maritime Services, Mr Calistus Nwabueze Obi and other senior officials of NIMASA.

Addressing workers, Peterside expressed gratitude to President Muhammadu Buharri for appointing him and said he was worried by the battered image of the agency.

He, therefore, urged workers to join hands with him to redeem NIMASA’s image and achieve its core mandate.

“I am here to introduce myself to my masters. I am sure you have a fair idea of my name. My name is Dakuku Peterside. From outside, people are saying that NIMASA has all it takes to achieve its core mandate. But it seems to me that we have not been able to present ourselves well.

“Therefore, we have some reputation or image issue to deal with. Discussing with the director of Administration and executive director, I understand that we have internal issues to deal with likewise the external”, he said.

The new NIMASA boss said a roadmap would be drawn to reposition the agency for greater efficiency and productivity.

“I intend to have directorate and departmental briefings from April 5”, Mr. Peterside said.

Officials at the meeting pledged to remain committed to the objectives for which the agency was set up and support the director general.

A senior official, who craved anonymity, said they were happy they have a young person as their director general.

“For over 40 minutes, he was receiving reports from the executive director and directors. It shows that the director general is youthful. We have no doubt that the he will bring back sanity to our agency.

“Under [Patrick] Akpobolokemi, we lost our honour and our glory as a reputable government agency”, the official said.