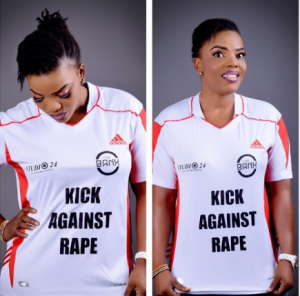 Veteran Nollywood actress and businesswoman, Empress Njama has been photographed showing off her football skills as she joined the novelty match for the Kick Against Rape movement held in Abuja.

Empress can be seen among other female celebrities and beauty queens who had joined the movement, with the novelty match held yesterday, March 22, 2016 in Abuja.

The novelty match had been organised by Queen of Aso Nigeria in collaboration with House of Empress Njamah Foundation.

The game had been organised in a bid to create awareness on rape issues as well as the protection of the rights of the #GirlChild.

Empress as well as other female celebrities where pictured in full football regalia before, during and after the game.