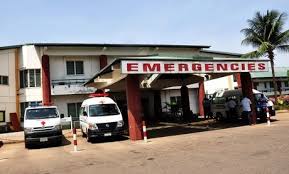 One Jude Nwadudu, believed to be a police Sergeant, was found dead in a hotel at Iju, a suburb of Lagos state during the Easter period.

The Nation reports that the deceased was said to have gone to the unnamed hotel with a female friend during the Easter period.

It was gathered that the late Nwadudu, whose wife is also a Sergeant, was recently transferred to the Special Anti-Robbery Sqaud, SARS headquarters of the state Police Command from Kogi state.

Nwadudu, a father of four, reportedly slipped in the restroom and hit his head on the floor and the unidentified woman reportedly raised the alarm after he became unconscious.

He was, however,rushed to a nearby hospital, from where he was transferred to Lagos University Teaching Hospital, LUTH, at Idi Araba. He eventually gave up the ghost on Easter Sunday.

Confirming the incident, the Police spokesperson, Dolapo Badmos, a Superintendent (SP), said the deceased “has just been transferred to Lagos State Command.

“On resumption, he got health issues and has been receiving treatment in the hospital before he died,” Badmos said.
Meanwhile, his female companion who was with him in the hotel room when the incident happened, was reportedly invited for questioning and was released after writing her statement.