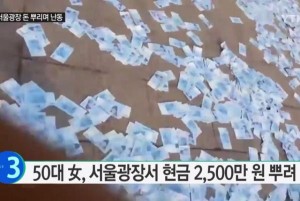 A woman in South Korea threw nearly $20,000 cash into a downtown Seoul walkway, but police said no passersby stopped to pick up the money. Police said the 56-year-old woman threw 22 million won, the equivalent of $19,030, onto the ground in Seoul Square about 5 p.m. Monday, but witnesses seemed content with snapping photos of the scene and no one was seen taking any of the cash.

Scoop reports that the witnesses may have had reason to decline the free money, as the country’s laws view taking unattended money as a form of theft. However, police said the woman surrendered her rights to the cash by willingly throwing it into the square and no one would have been punished for picking it up.

The woman told police she was afraid her son and ex-husband were trying to take her money, so she decided to give it away to strangers to prevent them from getting it. Police said the woman had hired a private security guard to keep her safe while she threw the money into the walkway.

The woman was released after police determined she was not in need of protection. The final fate of the discarded cash was unclear.