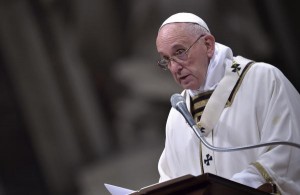 Pope Francis condemned the recent violence against a missionary-led nursing home in Aden, Yemen leaving 16 dead, including four nuns. Pope Francis said he was “shocked and profoundly saddened,” by news of the killings, which he described as “senseless and diabolical,” according to a statement released by Vatican City Secretary of State, Cardinal Pietro Parolin.

“He prays that this pointless slaughter will awaken consciences, lead to a change of heart and inspire all parties to lay down their arms and take up the path of dialogue,” the statement, released Saturday, said. During the attack, gunmen placed handcuffs on their victims before shooting them in the head. The four nuns reportedly killed belonged to the Kolkata-based Missionaries of Charity, founded by Mother Theresa more than 60 years ago.

“In the name of God, he calls upon all parties in the present conflict to renounce violence, and to renew their commitment to the people of Yemen, particularly those most in need, whom the Sisters and their helpers sought to serve,” Parolin said.

The nuns killed were of Indian descent. The priest in charge of the elderly care center, known as Father Tommy, is missing after the attack. Several others remain hospitalized. “The care home, its chapel and other artifacts were destroyed by the terrorists. Sister Sally saw the attackers and managed to save herself. We do not yet know what happened to Father Tommy,” said Missionaries of Charity representative Sunita Kumar.