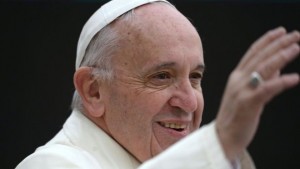 Pope Francis is more popular than any political world leader, an opinion poll has suggested. The poll by WIN/Gallup International indicates that Roman Catholics and Jews have the most favourable opinion of the Pope. More than half of the world’s protestants and even the majority of atheists and agnostics view him favourably.

About 1,000 people were questioned in 64 countries. BBC religious affairs correspondent Caroline Wyatt says that, three years into his papacy, Francis has enjoyed enormous goodwill and won the hearts and minds not just of Roman Catholics but also of people from other religions and the non-religious.

The Pope was most popular with Roman Catholics, of whom 85% said they had a favourable opinion of him, and among Jews questioned the figure was 65%. Among the 64 countries polled, the Philippines was the most enthusiastic nation with 93% thinking favourably of the Pope.