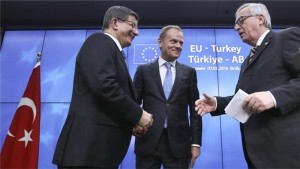 Turkey and the EU have reached an agreement on the main points of a proposal to tackle the massive influx of refugees into Europe. Donald Tusk, European Council president, said the leaders had made a “breakthrough” that sent “a very clear message that the days of irregular migration to Europe are over”.

The announcement came at the end of a long day of meetings in Brussels, during which Turkey is known to have asked for an additional $3.3bn in return for checking the flow of refugees across the Aegean Sea. The next step involves the presentation of the proposal to EU leaders at a key European Council meeting due to be held on March 17 and 18.

Turkey is due to receive $3.3bn until the end of 2018 to cover the costs of dealing with refugees, but it reportedly asked for double the amount during Monday’s talks.

Martin Schulz, head of the European Parliament, confirmed that the request for additional money came at the summit between Ahmet Davutoglu, Turkey’s prime minister, and EU leaders. After protracted negotiations, Martin Selmayr, spokesperson for Jean-Claude Juncker, president of the European Commission (EC), said on Twitter: “Deal. Breakthrough with Turkey.”

Another statement, from the Twitter account of Xavier Bettel, Luxembourg’s prime minister, said: “President of #EUCO will take forward the proposals and work out the details with the Turkish side before the March #EUCO.” The agreement could see Turkey and the EU cooperate to end the flow of irregular refugees to Greek islands and start resettling Syrian refugees directly from Turkey to the EU.