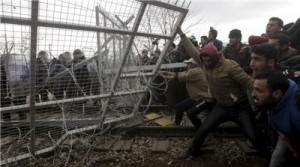 Clashes have erupted between French riot police and refugees and migrants as authorities began destroying makeshift shelters in the makeshift camp on the edge of Calais known as the “Jungle”. On Monday night, police lobbed tear gas canisters at residents of the camp who protested against the raid as about 20 demolition workers moved in to start pulling down the shacks by hand.

As night fell about 150 of the camp’s inhabitants threw rocks and struck vehicles heading for England on a port road which runs next to the sprawling camp, as some were wielding iron bars, an AFP news agency reporter said. Police also fired tear gas in clashes with activists who had formed a security cordon to protect the tear-down operation.

While there were no reports of injuries, authorities said at least three people were arrested. Earlier, around 20 makeshift huts went up in flames in an angry backlash as workers, guarded by scores of French police, began pulling down tents and shelters, while clashes continued throughout the afternoon.

“You can see that the protesters didn’t hesitate to set fire to tents and shelters or to throw stones at police,” Etienne Desplanques, a regional government cabinet director, told Al Jazeera. “It’s not acceptable, and it’s normal that we’re going to restore security,” Desplanques said. Several lorries and cars were blocked by the camp’s residents on the stretch of road overlooking a piece of ground which had previously been part of the camp.