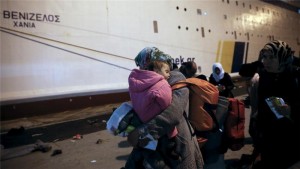 Refugee boats continued to arrive in Greece in the eastern Mediterranean, despite a recent deal between the EU and Turkey – whereby refugees will be deported back to Turkey – coming into effect. At least five boats, carrying more than 30 refugees each, arrived from Turkey between Saturday midnight – when the agreement came into force – and Sunday morning.

The majority of the refugees who arrived were from Syria, Al Jazeera’s Zeina Khodr, reporting from the Greek island of Lesbos, said. Under the deal struck on Saturday, for every Syrian returned, the EU will resettle one from a Turkish refugee camp.

But people who managed to reach Europe’s shores were hopeful they would not be turned back. “I don’t think they will reject us because we are coming from a destroyed city. We are asking for asylum on humanitarian grounds,” Ahmed, a refugee from Aleppo, told Al Jazeera upon his arrival in Lesbos.

“Not only is there war in our country but the situation in Turkey is bad for us.”  Those who arrived in Greece want to make their way to mainland Europe, some in search for a better life and others to be reunited with their family members who made the journey before them.

“We endured four years of war, bombardment, rocket attacks … I don’t want to be sent back to Turkey because my father and two sisters are in Germany and I miss them,” Rola Hallak, another refugee from Aleppo, said.  The EU-Turkey deal aims to strangle the main route used by refugees travelling to the EU and discourage people smugglers, but it has faced criticism from rights groups and thousands took to the streets of Europe in protest.