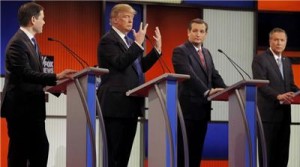 US Republican presidential frontrunner Donald Trump has come under fire from rivals Marco Rubio and Ted Cruz at a debate as establishment Republicans tried to muster some unity behind a last-ditch anti-Trump effort. The debate began on Thursday night in Detroit as a free-for-all fracas with tension mounting over Trump’s ascendancy and his drive to become the presumptive nominee should he win nominating contests in Florida and Ohio on March 15.

At centre stage, Trump defended himself from criticism earlier in the day from 2012 Republican nominee Mitt Romney and faced further questions about his record as a businessman at the debate.  Rubio, a US senator from Florida, pressed Trump on why he does not bring his clothing-making operations to the US from China and Mexico if he is so interested in bring jobs home, a central tenet of his unconventional campaign.

“This little guy has lied so much about my record,” Trump responded, adding that he had begun bringing some clothing operations home from overseas.  But Rubio persisted: “The answer is he’s not going to do it … The reason he makes it in China and Mexico is because he can make more money on it.” “Don’t worry about it, little Marco, I will,” Trump said dismissively.

“Well, let’s hear it, big Donald,” Rubio responded. The debate quickly went down a negative path when Trump responded to Rubio’s contention last month that Trump had “small hands.” “Look at these hands,” Trump said, flashing his two hands to the crowd. To the suggestion that he might be small elsewhere, Trump said: “I guarantee you there is no problem.”