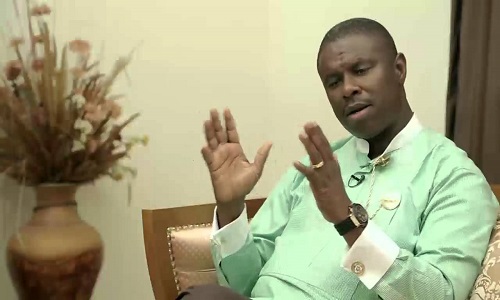 The All Progressives Congress, APC, in Rivers State has dismissed reports of a brewing crisis among its ranks, saying it remains focused and united more than ever.
The party was reacting to the reported disaffection between its governorship candidate in the April 11, 2015 election, Dakuku Peterside and the acting Managing Director of the Niger Delta Development Commission, Ibim Semenitari.
According to reports, Peterside was displeased with Mrs. Semenitari for accompanying a delegation from the Senate on a visit to Governor Nyesom Wike at the Government House, Port Harcourt, on Wednesday.
Mr. Wike is a member of the Peoples Democratic Party.
But the Rivers PDP Chairman, Dr. Davies Ikanya, in a statement on Friday, alleged that the rumour of rift in the party was being peddled by the state chapter of the PDP and that it was not only “a wicked lie from the pit of hell, but has no foundation whatsoever”.
The party said it was meant to cause disaffection among the Rivers APC leadership.
“This plot is dead on arrival because we are too intelligent and too close-knit a family to be deceived by such a fallacious and wicked falsehood intended to distract us from the urgent task of winning the forthcoming State and National Assembly re-run elections.
“How can the performance of a simple official duty by the Acting NDDC Managing Director amount to disloyalty to APC and a fictional quarrel with Dr. Peterside over the 2019 governorship ticket?” the party said.
“Many of the Distinguished Senators whom Mrs. Semenitari escorted to the Government House to see Governor Nyesom Wike are also APC members, so does their visit mean that they are also disloyal to the APC?”
The Rivers APC described Mrs. Semenitari, who was the immediate past Information Commissioner in the state, as an accomplished administrator who knew where to draw the line between her official duties and politics.
It said, “As head of NDDC, she has a statutory role that covers the six states of South-South that includes Rivers State plus the two states of Abia and Imo in the South-East and Ondo State in the South-West.
“The Senate is probing the 16 years of NDDC and if the investigating senators are to visit the Rivers State Governor on issues pertaining to NDDC, are we saying that the Acting NDDC MD should not accompany them because she is an APC chieftain even while most of the
Senate Committee members are also APC members?”
The APC said it was not only happy with the NDDC managing director but also proud of her, stressing that her commitment and loyalty to the party was never in doubt.
The party also said Mrs. Semenitari had been one of the arrow heads of the struggle it had embarked upon and also one of the most persecuted among its members.
“As a matter of fact, she was the only one invited to appear before the then dreaded National Security Adviser to erstwhile President Goodluck Jonathan when the heat was on us at Rivers State,” the party said.
“Apart from this, she was one of our principals targeted to be assassinated by the PDP hoodlums at the Okrika rally attack.
“Her house in Port Harcourt was attacked immediately Wike took over as governor and her personal jeep towed away by the Wike regime just to publicly disgrace her.
“So, if anybody is trying to blackmail her for any reason such a person is embarking on a mission impossible”.
The APC explained that it was not factionalised as had been alleged, insisting that it remained united under the leadership of the Minister of Transport, Chibuike Amaechi.
“It is worth stressing that we have no Dakuku faction or any faction or factions but one united, compact, virile and vibrant Rivers APC under the leadership of Rt. Hon. Chibuike Rotimi Amaechi”, it said.
“As for the purported intrigues about 2019, that does not deserve any attention because it just does not make sense as we cannot start talking about 2019 when we have not concluded the 2015 elections”.
The Rivers APC urged its members, supporters and the public to ignore the story of the alleged rift, saying it was “a desperate strategy by the floundering PDP to shore up its image ahead of the forthcoming Assembly re-run elections, for which PDP has become jittery because of the imminent defeat staring it in the face”.