Robbers have chopped off the wrists of a septuagenarian, Pa Jacob Ikilo, a security guard at a filling station at Eyaen village, on the Benin-Auchi Road, the Nation reports.

Pa Jacob is receiving treatment at the Male Orthopaedic Ward of the University of Benin Teaching Hospital (UBTH), where doctors are battling to save his right wrist. 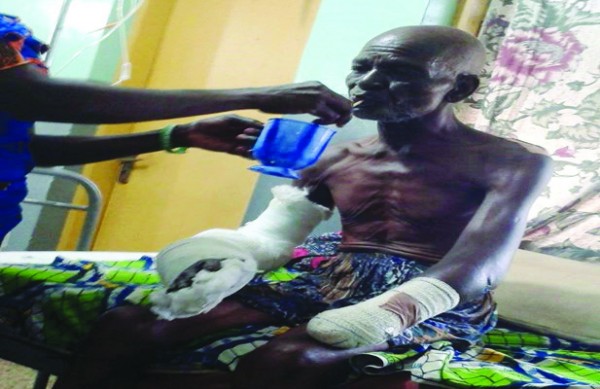 The severed right wrist, being kept alive by a tiny blood vessel, requires N380,000 to be fixed back.

The incident was said to have occurred on Monday, February 29, at 3 am, when Pa Jacob was on night duty.

Pa Jacob said the robbers used machete to chop off his wrist when he went to check an unusual noise at the plant house.
He said he heard people running towards him. As he attempted to run, the robbers attacked him.

“When I was coming from the generator house, they surrounded me. They just cut off this my hand (left hand). As I shout, they said shut up and cut the other hand. I fell down and started asking them to leave me, that I was dying.”

The company manager was said to have invited the Egba Divisional Police Station after a driver discovered Pa Jacob.

Pa Jacob said he needs money to pay the bills as he had been working for the last six months without his N15, 000 monthly pay.He said his employer did not pay regularly even when he did 12 hours work daily.

Pa Jacob added that N3, 000 was deducted and paid to the company that helped him to get the job which made his take home pay N12,000.