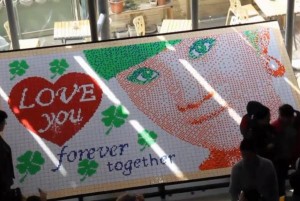 A Rubik’s cube enthusiast in China used 3,344 of the puzzles to create the image of his girlfriend’s face and a message of love for his marriage proposal.

Video of the March 7 proposal in Xiamen, Fujian Province, shows Lin Yucheng, 27, a Rubik’s cube expert and teacher, unveiling his artwork for his girlfriend and an assembled crowd.

Lin’s artwork shows his girlfriend’s face created from Rubik’s cubes along with the messages “love you” and “forever together” spelled out in English. The assembled crowd applauds as Lin’s girlfriend accepts the proposal.

The entire project used 3,344 Rubik’s cubes and Lin spent more than 20 assembling them into his desired shape.