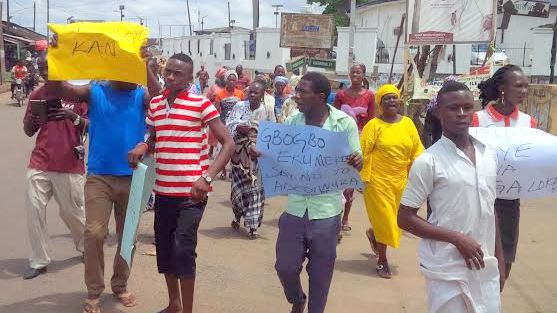 The appointment of Idowu Olaniyi Adediwura as the new Obalufe of Iremo is threatening to shatter the peace that has reigned in the ancient Yoruba kingdom since the ascension of Oba Adeyeye Ogunwusi as the Ooni of Ife.

In what appeared to be disapproval of the appointment of Adediwura, the Aga Orunto ruling house in Ile Ife on Monday mobilized a protest march to the palace of the Oni, who they alleged had wrongly picked the Obafule.

They expressed their anger with placards and solidarity songs even as they alleged tha Oba Ogunwusi was ill-advised in his choice of the Obalufe.

The Obalufe, who doubles as the Prime Minister of Ile-Ife, by virtue of his traditional position, is also the head of Ife Kingmakers and next in rank to any Ooni of Ife.

The previous occupier of the position, Solomon Folorunso Omisakin, died last year October at the Obafemi Awolowo University Teaching Hospital (OAUTH), Ile-Ife, at the age of 83.

Protesting the appointment, members of the ruling house insisted that the Ooni ought to have appointed someone from their family to be the new Obalufe of Ife Kingdom.

In the order of appointment of the Obalufe among the ruling families, the Ajagbusi, comes first, then the Ado Gbodo, Aga and Jaojo, follows respectively. The last Obalufe, is said to have hailed from the Ado Gbodo ruling house.

Oluwasegun Olayade, one of the princes of the family, said it was the family’s demand that the decision of the Ooni on the Obalufe should be reversed in the interest of peace.

Prince Olayade said it was curious that the Ooni was chosen from Giesi family as stipulated by the government gazette, only for the same document to be abandoned when it was time to select the Obalufe.

“When the issue was getting hot, the Ooni called us to present candidates that can occupy the throne and that if we do not present the names on time, he will choose for us.

“We submitted the names as and when due, but he refused to call us back as we agreed. Suddenly, we heard that the Ooni has appointed someone that is not from our Aga ruling house, which is the next house to be appointed Obalufe.

“This has never happened before; the position of Obalufe is a prominent one that cannot be bathed with injustice. Ooni can’t just over rule our choices when it is not the case that we are fighting dirty within the family. The previous method has always been peaceful using the gazette; this one may result to crisis.

“The Ooni should return the position to the Aga Orunto family for peace to reign”.

Another member of the family, Elizabeth Oladimeji, expressed dismay at what she described as the Ooni’s imposition of a candidate on the ruling house, describing his action as sabotage, cheating and deprivation of their rights.

“We are the next to produce the next Obalufe. They only want to rob us of our right because the family that is appointed by Ooni produced the Obalufe before Omisakin (the last Obalufe died). So, Aga should be the next”, she argued.

“We have seen instances and cases where it takes two to three years before a candidate is produced. For instance Akinlalu died before the Obalufe and the post is still vacant.

“We appeal to the Ooni to give us our right. When it was the turn of Giesi that the Ooni came from, no one deprived them of getting their right; it is our turn too to produce Obalufe and we should be given”.

In his reaction, the Ooni said the appointment of the new Obalufe followed due process.

The Director of Media, Ooni’s palace, Moses Olafare, enjoined the people of Iremo community and Ile-Ife in general, to join hands with Ooni in his effort to ensure peace, progress and unity of Ile-Ife.

“The appointment of Obalufe is in order and followed the right process,” Mr. Olafare pointed out.

“The appointment was done after wide consultations with appropriate quarters and followed the laid down procedures.

“We urge the few people that are aggrieved to allow peace to reign. The new Obalufe is capable”.‎