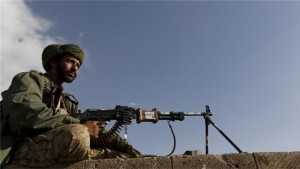 Saudi Arabia has released seven Yemeni prisoners in exchange for one of its soldiers, the kingdom’s news agency reported. The report on Wednesday marked the first announced prisoner swap since a coalition of Arab countries went to war against rebels in Yemen nearly a year ago. The swap and an apparent truce along the Saudi-Yemen border followsunprecedented talks between the sides.

The media statement, carried by the Saudi Press Agency (SPA) , did not specify if the Houthis had been holding the soldier who was released. SPA said Yemeni tribal leaders coordinated the swap which led to the release of Corporal Jaber al-Kaabi. It also said Yemeni tribal figures helped facilitate the delivery of aid across the border into Yemeni villages.

The seven Yemenis had been detained in areas of military operations near the border, the report added, but did not give details on when the Yemenis and the soldier had been detained nor where the exchange took place.

Mohammed Ali al-Emad, a brother of a top Houthi politician with knowledge about the talks, told The Associated Press news agency that recent communication is aimed at paving the way for possible ceasefire negotiations because the warring sides “have realised that war so far has failed to force any of the two to retreat”. Analysts said that the agreement was the first important step towards finding a resolution to the conflict, which the United Nations says has killed more than 6,000 people, left almost 8 million without a regular supply of food, and forced 3.4 million children our of school.