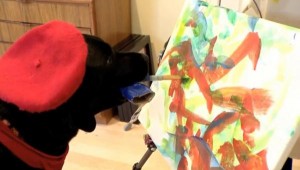 A black Labrador retriever from Long Island has turned his unique skill for painting into an opportunity to raise money for an animal charity. Dagger, the 3-year-old canine artist also known as “Dog Vinci,” was meant to be an assistance dog, but his fear of walking up and down stairs led him to a calling more similar to that of his owner.

Yvonne Dagger, also an artist, told Pix 11 that one day Dagger showed a particular interest in one of her paintings. “He always lays down next to me. But one day he was nudging me and I asked if he wanted to paint and his tail started wagging!” she said. Dagger uses a paint brush made from a paper towel tube wrapped in duct tape to complete his paintings by following Yvonne’s commands.

“Every stroke you see on the canvas is Dagger’s mark,” she told ABC 7. Since discovering Dagger’s talent she began selling his paintings in exchange for $50-$200 donations to Canine Companions for Independence, the organization Dagger was meant to serve. “That’s really a great thing for Dagger to be able to do,” Yvonne said. “In his very four-legged, furry way, he’s able to give back to the people that were so kind to him.”

Dagger II’s paintings have raised more than $1,000 for Canine Companions for Independence and he continues to receive commissions from around the world. “We’ve taken in so many orders for paintings,” Dagger said. “He was painting yesterday. He will be painting again today.”