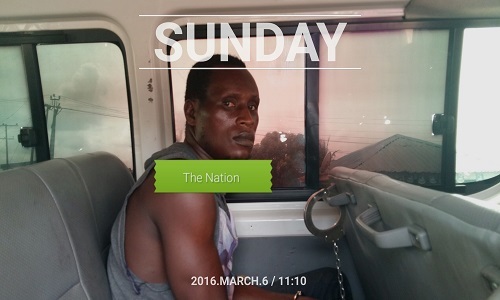 The identity of a suspect in the kidnap of three girls from Babington Macaulay Junior Seminary (BMJS) Ikorodu, in Lagos State, Emmanuel Arikiti, has been unveiled.
Arikiti, who a police source described as a kingpin, was arrested alongside two others on Sunday morning by the Lagos Police Command.
The suspect and his gang kidnapped three girls – Oluwatimehin Olusa, Tofunmi Popoolaniyan and Deborah Akinayo from their classroom on Monday night.
The kidnap victims were however, rescued at about 9:45am on Sunday by a team led by the Lagos Commissioner of Police, Fatai Owoseni.
Their rescue came two days after the Inspector General of Police, Solomon Arase deployed the Special Intelligence Response Team (SIRT) to compliment the efforts of the Lagos State Command.
Arikiti and the other two suspects are currently at the command’s headquarters in Ikeja.
Photo Credit: The Nation