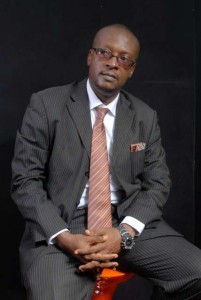 Charles criticised the omission in his review shared today March 7, 2016 of the awards which he titled, ‘AMVCA 2016: The bleh and the boom!’

He wrote, ‘One of the veterans in the television industry in Nigeria and basically among the first five pioneers of the film industry in the seventies as a Producer as well, Jab Adu, was poignantly missing in the list.’

‘That is unforgivable, if you ask me. The popular Bassey Okon of ‘Village Headmaster’ way back and Mr Adio in ‘Adio’s Family’ passed on a few days ago and the best the research team could have done was to add him to the roll call. He died a day or two after Mike Odiachi, who was in the list mercifully. May his soul rest in peace, as with the others.’

‘In introducing Osas and Gbenro Ajibade as the next set of presenters, Minnie called them ‘The Newly Weds’. I did wonder then if Minnie was reading a prepared script or just gushed out her own personal introduction because it’s been months since the couple got married. That wouldn’t qualify for being Newly Weds, if it comes to that.’