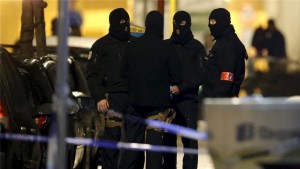 Belgian police have arrested six people in raids as part of their investigation into suicide attacks on Brussels, as questions mounted about possible security lapses. The federal prosecutor’s office in Belgium said on Thursday that the arrests took place in the Brussels neighbourhoods of Schaerbeek and Jette, as well as in the centre of the Belgian capital.

No information about the identities of those arrested was released. Judicial authorities will decide on Friday whether they should be charged, the prosecutor’s office said. Suicide bombers hit the Brussels airport and a metro train on Tuesday, killing 31 people and wounding at least 270 in the worst such attack in Belgian history.

The Islamic State of Iraq and the Levant (ISIL, also known as ISIS) group, which claimed responsibility for the Brussels bombings, also took credit for coordinated attacks in Paris in November that killed 130 people.

In a separate development, French authorities said they thwarted a plot there “that was at an advanced stage”. A French national suspected of belonging to a network planning an attack was arrested in Paris on Thursday morning. Bernard Cazeneuve, the interior minister, said that the arrest helped “foil a plot in France that was at an advanced stage.”