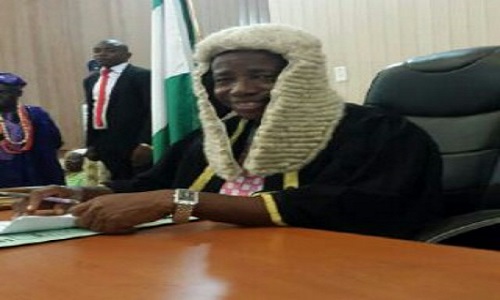 The Speaker, Ekiti State House of Assembly, yesterday accused operatives of the Department of State Services (DSS) of invading the complex and making away with four lawmakers.
Speaker Kola Oluwawole told reporters that “more than 10 DSS men armed to the teeth” stormed the Assembly complex and shot sporadically into the air causing panic among legislators and staff.
He, however, only gave the name of the legislator representing Efon Constituency, Afolabi Akanni, as “one of those abducted” but failed to reveal identities of the other three.
Kolawole said that the whereabouts of the other three ‘missing’ legislators remain unknown just as the reasons for the ‘invasion’ and ‘abduction’ were yet to be ascertained.
When contacted, the state police spokesman, Alberto Adeyemi, denied knowledge of the alleged invasion of the Assembly complex or abduction of any lawmaker.
Oluwawole, however, insisted that the abduction took place, describing the development as a clandestine plot by “the President Muhammadu Buhari-led All Progressives Congress (APC) Federal Government to destabilise Ekiti State using the instrumentality of DSS”.
The Speaker alleged: “Yesterday, the House of Assembly Chamber was invaded by armed men of the DSS.
“Not minding that various committees of the House were meeting, more than 10 DSS men who were armed to the teeth invaded the Assembly Complex, shooting sporadically into the air, thereby causing panic among members and staff of the House of Assembly, who had to scamper for safety.
“At the end of the commotion created by this barbaric act, we discovered that four of our members could not be found.
“It was only this morning that we were able to establish that Hon Afolabi Akanni, representing Efon Constituency was abducted and taken to Abuja.
“Whereabouts of three other members is still unknown as we speak, and reasons for the invasion and abduction of our members are not known.
“However, we got it on good authority that the script now being acted by the DSS is part of the APC and President Buhari’s clandestine plot to cripple the Ekiti State Government by arresting and detaining top functionaries of the government.
“The plot is to harass, intimidate and embarrass top officials of the Ayodele Fayose government because of his critical stance on the Buhari’s government.
“We are aware that 18 of our members have been pencilled down for harassment and the game plan is to harass them to submission, with a view to coercing them into signing an already prepared notice of impeachment of the governor and his deputy.
“However, we wish to inform those orchestrating the harassment and intimidation of officials of the Ekiti State Government, especially honourable members of the State House of Assembly that this is 2016 and not 2006.
“The same tactics used 10 years ago to truncate democracy in Ekiti State will not work this time. We therefore wish to tell the APC agents of political instability that this time around, this House of Assembly will not be available for any ungodly use”.
He added: “Nigeria is not a banana republic that can be ruled anyhow by anyone and Lawal Daura (from Katsina) and his men, who are playing exactly the same role played between 1984 and 1985 by the National Security Organisation (NSO) under Lawal Rafindadi (from Katsina) should know that this reign of brute force over constitutional democracy will fail.
“Therefore, the Abuja based agents of destabilisation should get it into their heads that we will never be harassed or intimidated into buying into their sinister agenda”.