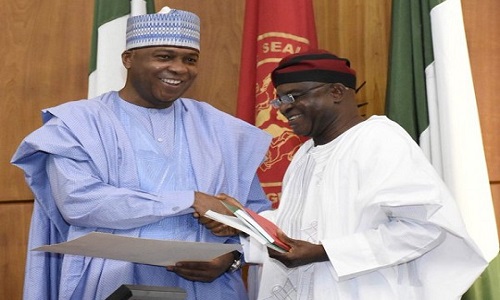 Former Senate President David Mark on Wednesday received a standing ovation from all his colleagues with the exception of Senators Shehu Sani (APC, Kaduna central) and Isiaka Adeleke (APC, Osun West), who remained seated, following his swearing-in by his successor, Bukola Saraki.

Mark, who is the longest serving senator having won election into the red chamber to represent the people of Benue South senatorial district since 1999, was in December 2015 sacked by the Court of Appeal sitting in Makurdi, the Benue State capital, which also ordered a re-run election.

However at the rerun poll, which held penultimate Saturday, the former Senate president again floored his All Progressives Congress rival, Daniel Onjeh, who has vowed to contest the outcome of the election.

According to Onjeh, the poll ought to have been declared inconclusive by the Independent National Electoral Commission, INEC, because the margin between him and Mr. Mark (12,571) was lower than the number of canceled votes (29,273).

Mark, who also holds the record as Nigeria’s longest serving Senate president yet (2007-2015), received a warm reception from PDP senators, all of whom rose to their feet to welcome him before the APC senators, including Saraki, followed suit. But Sani and Adeleke remained on their seats.

Soon, the chatting of the “the youngest and most ranking Senator” filled the air as Mark went round to shake the hands of his colleagues immediately after he was sworn in.

Afterwards, Mark went straight to his former seat situated at the last row of the section of the PDP.