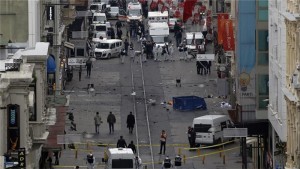 An explosion believed to have been caused by a suicide bomber has hit the popular Istiklal Street in central Istanbul’s Taksim square area, with several deaths reported. The city’s governor said at least five people were killed and 20 were injured – two critically – in Saturday morning’s explosion.

The suspected suicide bomber is believed to be among those killed. Three Israeli citizens are among the wounded.  Footage from the scene showed police and emergency services cordoning off the street, which has been completely cleared of people. Witnesses told Al Jazeera that hundreds of people ran in panic away from the site of the explosion, moments after the incident.

There was no immediate claim of responsibility. Istiklal street is a long pedestrian thoroughfare that winds its way through the Beyoglu neighbourhood from Taksim Square. It is rimmed by hundreds of shops and would have been filled with pedestrians at the time of the explosion. Al Jazeera’s Jamal Elshayyal said the location of the explosion was the equivalent of a bomb going off in Oxford St in London or Fifth Avenue in New York.

The explosion comes as Turkey is on edge following two recent suicide bomb attacks in the capital, Ankara, which were claimed by a Kurdish group, that is an off-shoot of the outlawed Kurdistan Workers’ Party, or PKK. Turkey has been fighting on multiple fronts. As part of a US-led coalition, it is battling the Islamic State of Iraq and the Levant (ISIL, also known as ISIS), which has seized territory in neighbouring Syria and Iraq.