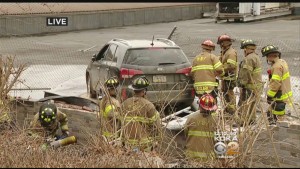 Authorities say a motorist drove his SUV off a road, crashed through a fence and landed on the roof of a Pittsburgh supermarket.

Giant Eagle spokesman Dick Roberts says neither the driver nor anyone in the store was injured in the Tuesday morning crash.

Roberts says there was no structural damage to the building. He says the SUV landed right-side up above a storage area used to prepare produce.

The Giant Eagle sits below other streets in the city’s Greenfield neighborhood. Images on WPXI-TV show the right-rear roof is slightly below street level.

Fire Chief Mike Mullen says the impact tore part of the roofing and gasoline leaked from the car into the store, leading to an evacuation. The store reopened hours later.