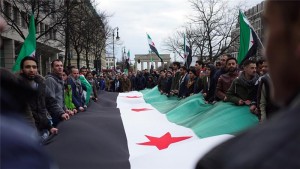 Syrian flags fluttered against the grey afternoon sky as a steady line of protesters gathered under Brandenburg Gate in the German capital to mark the fifth anniversay of the uprising against President Bashar al-Assad’s government. About 500 Syrian activists and refugees gathered on Tuesday chanting: “Long live Syria and down with Assad.”

Sitting on a fellow protester’s shoulders, one man addressed the crowd in Arabic: “Five years later and the revolution lives inside us stronger than ever.” From the square, the crowd marched in columns to the nearby Russian embassy, chanting in unison against Assad and Russian President Vladimir Putin.

“Want to stop the refugee wave? Stop Assad and Putin in Syria,” one banner read. A close ally of the Assad government, Russia expanded its role in the Syrian conflict when it began carrying out air strikes across the country five and a half months ago. “This is the birthday of the Syrian revolution,” Louai al-Hamedi, a 22-year-old Syrian who came to Germany a year ago, told Al Jazeera.

Originally from Raqqa, he argued that protests will continue inside and outside Syria until the Assad government is gone. “Our revolution was peaceful from the beginning,” Hamedi said. “We never wanted an armed revolution, but the regime made it an armed [conflict].” The Syrian conflict started as a largely unarmed uprising in March 2011 before launching into an armed conflict that has claimed the lives of more than 260,000 people, according to the UN.