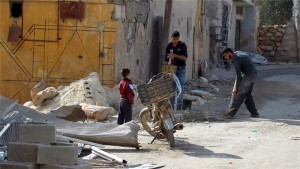 Syrian rebels have said they are under fierce government attacks near the Turkish border despite a cessation of hostilities agreement as US expressed concern about regime assaults on civilian areas. The agreement drawn up by the US and Russia, which came into effect on Saturday, has slowed but not entirely stopped fighting in the conflict approaching its sixth anniversary. Both the Syrian government and rebels have accused each other of violations.

The Reuters news agency quoted a rebel official and the Britain-based Syrian Observatory for Human Rights monitoring group as saying that government forces pressed an offensive against opposition forces in Latakia province at the Turkish border on Wednesday. Fadi Ahmad, spokesman for the First Coastal Division, a Free Syrian Army group, said government forces had brought in reinforcements and that fighting was as intense as anything preceding the cessation of hostilities.

“The battles were today very fierce,” he told Reuters.

The Syrian government has prioritised securing the Turkish border through which rebel groups are supplied with weapons from states seeking Syrian President Bashar al-Assad’s downfall. The area being fought over in Latakia overlooks the rebel-held town of Jisr al-Shughour in neighbouring Idlib province, and the Ghab Plain, where rebel advances last year were seen as a growing threat to Assad, Reuters reported.

“Battles continue in vital areas that the regime wants, and where there was no truce in the first place. There is bombardment and battles,” a rebel commander told Reuters. “We are in the fifth day and there is no change in these areas,” he said, in reference to areas in the provinces of Latakia, Homs and Hama. There was no immediate comment from Damascus, which has denied breaching the terms of the truce.