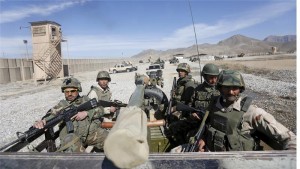 The Taliban has refused to take part in peace talks until the government orders foreign troops out of the war-torn country and releases all of its fighters from prison.  The announcement on Saturday came as a blow to efforts to restart peace negotiations in the Pakistani capital Islamabad to end the nearly 15-year-long war.

“We want to repeat our stance once again that until the occupation of foreign troops ends, until Taliban names are removed from international blacklists, and until our detainees are released, talks will yield no results,” a Taliban statement said. “We unequivocally state that the esteemed leader of Islamic Emirate [Taliban] has not authorised anyone to participate in this meeting and neither has the Leadership Council of Islamic Emirate decided to partake in it.”

Following a meeting of the so-called Quadrilateral Coordination Group – comprising representatives of Afghanistan, Pakistan, China, and the US – in Kabul last month, officials had expected direct peace talks between the Afghan government and the Taliban this week. Afghanistan has repeatedly called for all Taliban groups to sit at the negotiating table, though President Ashraf Ghani has said his government will not make peace with those who kill civilians.

A first round of direct talks was held last summer in Pakistan, but the process quickly derailed after the announcement of the death of Taliban founder Mullah Omar. The Taliban, toppled from power in a US-led military intervention in 2001, has waged an armed campaign to overthrow the Afghan government and re-establish its rule. The nearly 15-year conflict has killed thousands of people and strained the country’s economy.